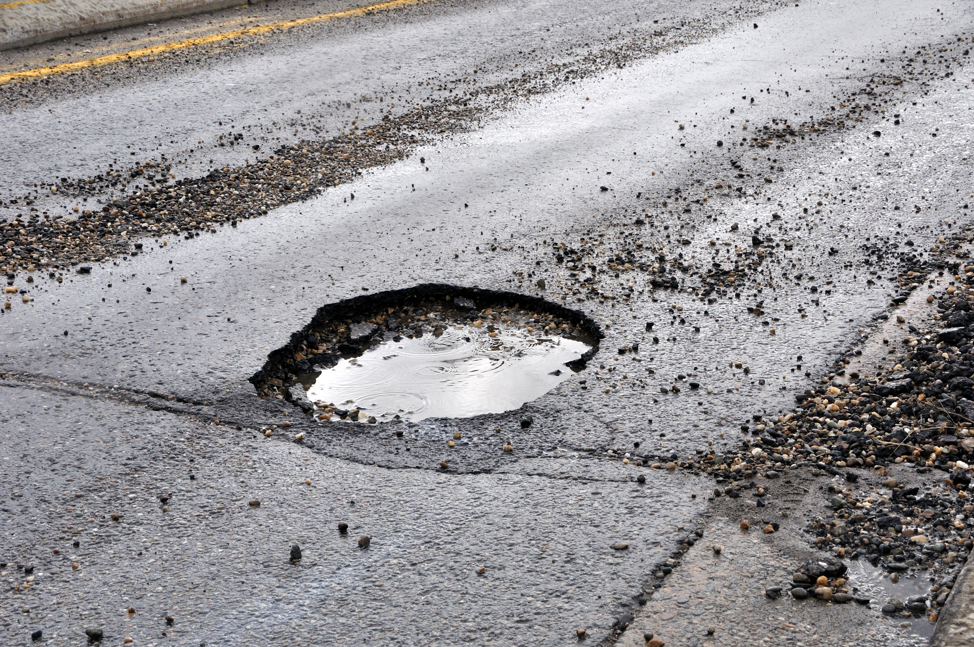 In the vast majority of cases, municipalities do everything they can to keep roadways in good condition. Unfortunately, they can’t be in all places at one time. As a result, damage to your vehicle as a result of potholes is sometimes an inevitability.

Of all types of road damage, perhaps none is more dreaded than the pothole. Hitting a pothole while driving at 25 to 75 miles per hour can send shivers down one’s spine.

Unfortunately, this fear is justified. Why? Because potholes can do some serious damage to automobiles. What kind of damage, you might be wondering? Let’s discuss below.

Potholes can cause a number of problems in automobiles. The most typical problems associated with hitting a pothole include the following:

One of the most common problems associated with hitting potholes is damage to your tires. The sudden impact of a pothole can put a great deal of stress on a tire, pressing it down so that the air inside of it has no place to go. In some cases, this leads to blowouts, and requires an almost immediate tire replacement.

Suspension damage is exceedingly common amongst cars that have encountered potholes. The jarring impact can bend a suspension component in an improper manner, causing the vehicle to sit in an off-kilter manner. This is particularly true if the pothole was very deep.

Alignment problems are another set of problems to look out for after you’ve run into a pothole. A pothole can not only misalign your vehicle’s wheels, but its axis, and a variety of other components as well. If something feels “off” about your vehicle after hitting a pothole, this is likely the problem you’re dealing with.

In rare cases, potholes will cause internal damage to automobiles. Your transmission could spring a leak, your valves could crack, and a variety of other components could suffer miscellaneous types of abuse. If your vehicle starts behaving oddly after you’ve hit a pothole, you would be wise to check under its hood. Something could very well be amiss.

Factors that Determine the Extent of the Damage

Obviously, not all potholes are going to case the same level of damage. In fact, many potholes won’t cause damage at all. There are a few different factors that determine the extent of the damage caused by a pothole.

The speed at which you’re moving has a large impact as well. Generally, driving fast over a pothole will cause more damage than driving slowly over a pothole.

The last factor is luck. In some cases, a vehicle might hit a pothole extremely hard but receive no damage. In other cases, it might only graze it but require hundreds of dollars’ worth of repairs. For this reason, you should do your best to avoid potholes altogether.

In Need of Auto Body Repair Company in Westchester, Illinois?

Has your vehicle recently encountered a large pothole? Has it taken on damage? If so, and if you’re in need of auto body repair shop in Westchester, Illinois, we here at Lombard Body & Fender are the people to see.

Over the years, we’ve encountered a bevy of unfortunate vehicles. We’re no strangers to fixing auto damage. Fortunately, regardless of the type of damage your vehicle has taken on, we can repair it.

What Can a Glendale Heights Auto Body Repair Shop Do for Your Vehicle?

Auto Body Repair in Elmhurst, Illinois: Getting Your Vehicle Through Winter Weather

While your car is always somewhat vulnerable to damage, the winter tends to amp that…

When the body of your vehicle takes on damage, many people’s first instinct is to…

Regardless of how many precautions you take, your vehicle is bound to take on cosmetic…