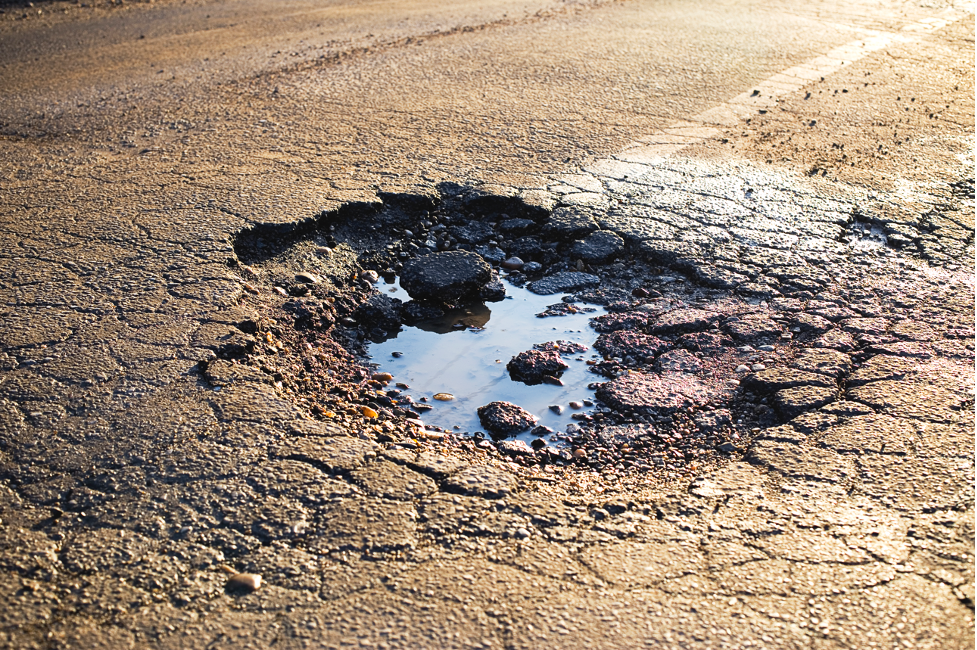 Generally speaking, towns and cities do what they can to maintain their roadways. That said, they’re not miracle workers. They can’t repair every damaged road the second it becomes damaged. For this reason, you’re almost sure to come across a less-than-ideal road at some point.

If you’re really unfortunate, you might come across a particularly bad pothole that can cause substantial amounts of damage to your vehicle if you’re moving at high speeds. Are you curious about the dangers of potholes and how they pertain to auto body repair in Forest Park, Illinois? If so, you’re in the right place — we’re going to discuss everything you need to know below.

What Issues Do Potholes Cause?

Potholes can lead to a number of different auto body problems. We’ll discuss the most common of these problems below.

One of the most common issues related to potholes is damage to your vehicle’s tires. If a pothole is particularly deep, it can cause a tire to compress, increasing its air pressure and sometimes resulting in a pop or puncture. There’s also a risk of the wheel becoming bent or misaligned. In both cases, extensive repairs and/or replacements are needed.

Suspension issues are also quite common in vehicles that have struck potholes. The sudden drop caused by the pothole can jar the vehicle’s suspension, causing damage to several of its components.

Just as a vehicle’s suspension can be jarred by a pothole, so too can a vehicle’s frame. When this occurs, the frame can incur alignment issues, making the vehicle less functional and unsafe to drive. This is a problem that you don’t want to let persist, as it can be very dangerous. If your vehicle alignment feels off after you’ve hit a pothole, it’s recommended that you take it into an auto body specialist.

Though it’s not very common, it is possible for potholes to cause damage to the interior components of a vehicle. For instance, a pothole might cause a transmission to spring a leak. In some cases, it could even cause damage to the engine. Unfortunately, auto body shops aren’t always equipped to handle these types of problems. As such, if you encounter them, you may need to see a mechanic.

What Determines the Severity of the Damage?

Now, potholes aren’t always guaranteed to cause damage to your vehicle. Many of them can be driven over without worry. Some will only do slight damage, while some will lead to severe and costly damage. The question is: what makes the difference?

The most important factor tends to be the size of the pothole. If a pothole is 2 feet across and 4 inches deep, it’s going to cause much more damage than is a pothole that’s 1 foot across and 2 inches deep, for example. This is because the latter pothole won’t cause as big of a shock to the vehicle.

Another big factor is the speed at which the vehicle is moving. If you’re traveling at 45 miles per hour, your vehicle will likely suffer more damage than it would if it were moving at 20 miles per hour.

In Need of Auto Body Repair in Forest Park, Illinois?

Have you driven over a pothole recently? Is your vehicle damaged? If so, and if you’re in need of auto body repair in Forest Park, the auto body specialists at Lombard Body & Fender are the people to see.

We are well-versed when it comes to repairing damage caused by potholes, having fixed thousands of vehicles throughout the Forest Park area. Regardless of the type of auto body damage your vehicle has suffered, we can fix it.

In Need of Auto Body Repair Shop in Wheaton, Illinois? Here are the Services Available to You

Has your vehicle been involved in a collision? Are you in need of auto body…

Maybe you were recently in a fender bender? Perhaps your car got caught in a…

Because they spend most of their time outside, automobiles are highly prone to exterior damage.…

Get Acquainted with Our Northlake Auto Body Repair Services

Because they’re subject to so many external elements, cars, trucks, vans, and other vehicles are…